Microfinance: How AP govt Killed it .. An Detailed Analysis

What is Microfinance & How it all started?
It all started somewhere in Bangladesh when Muhammad Yunus during visits to the poorest households in the village of Jobra near Chittagong University, discovered that very small loans could make a disproportionate difference to a poor person. Traditional banks did not want to make tiny loans at reasonable interest to the poor due to high risk of default. But Yunus believed that, given the chance, the poor will repay the money and hence microcredit was a viable business models. In 2006 Yunus and Grameen Bank received the Nobel Peace Prize "for their efforts through microcredit to create economic and social development from below. Microfinance was able to do what none of the governments had been able to do that earlier, provide loans to the poorest of poor to earn their livelihood from their own savings and help them come out of the not‐so‐benevolent arms of moneylenders.
Microcredit in India and its journey in the state of Andhra Pradesh
What Yunus did in Bangladesh was something we in India also required to do to reach to the millions of people who were financially excluded from the formal financial system. From here microfinance made a beginning in India. In India AP was one of the states which took a lead on this form of finance for the poor and the industry flourished till brakes were put down on it in 2010.In 2010 AP govt brought an ordinance which changed the future of microfinance in India. There were several reasons why the govt brought such an ordinance but the knee jerk reaction to the ongoing crisis resulted in a totally breakdown of microfinance industry in Andhra and up to a certain degree had an impact on microfinance industry across India.
Reasons for the ordinance
AP Ordinance
As a result of hundreds of deaths the State Government of Andhra Pradesh passed a sweeping Ordinance governing all lending activities in the state by banks as well as non-bank finance with stipulations that no collateral may be taken, repayments must be monthly, nobody must have more than one loan outstanding, all financial services business must be carried out in government offices and the permission of government agencies must be taken before any loans can be taken. This wrote the death knell for Microfinance industry in AP and had its impact in the country.
The Impact of the AP govt Ordinance on Microfinance Industry
In its annual report “M-CRIL Microfinance Review 2012: MFIs in a Regulated Environment” M-CRIL comes up with the financial and social analysis of this whole issue. Following are some of the points being observed.
People Stopped making payments for loans
The industry plunged into crisis when clients in AP stopped payments .The AP Government’s ordinance on lending by MFIs made it virtually impossible for them to continue their operations in the state.
The unspoken message to clients was that MFIs would not be allowed to operate and, therefore, there was no need for them to repay their MFI loans.
Given the populist nature of (particularly) local level politics in India, this message became “spoken” when politicians actually went around the state with the message that MFI borrowers no longer had to repay their loans.
Discouraging borrowers from repaying their loans is an irresponsible act since it makes clients ineligible from receiving further loans and thereby disrupts their lives and economic activities even as it de-stabilizes the financial market. There can be problems in the functioning of any market; concern about such problems should lead to corrective actions and reforms, not to the destabilization and total shut down of whole segments of economic activity.
Growth of the sector has been undermined
While MFI operations continue to be a significant component of the financial system in the country and its contribution to financial inclusion continues to rival, if no longer exceed, that of the rural banking system, the efficacy of that contribution has been undermined by the crisis and its aftermath. 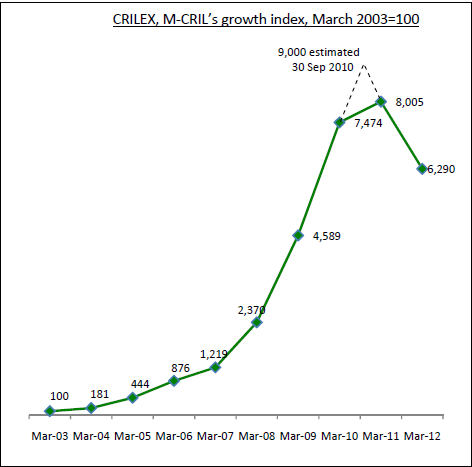 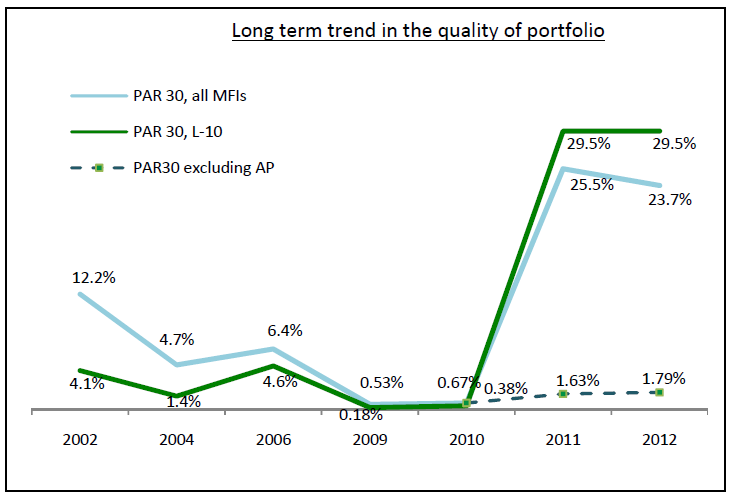 It is apparent that the heavy handed October 2010 ordinance of the Government of Andhra Pradesh has resulted in a delinquency crisis of huge proportions. All banks and capital market participants have immediately stopped or reduced extending any funding to non-bank finance companies on a nationwide basis


The relation between women and MFI can be understood from the fact that the overwhelming majority (98%) of Grameen’s borrowers are women. Women traditionally had less access to financial alternatives of ordinary credit lines and incomes. They were seen to have an inequitable share of power in household decision making. In fact the whole model of Microfinance revolves around women especially in rural areas and killing this source of finance means major unemployment in rural areas and talking away the opportunity from millions of rural women to earn their own livelihood and support the survival of their families.
With around 21 million borrower accounts the size of the microfinance sector more than matches’ significant parts of the Indian financial system in terms of the number of citizens affected a majority of them being women.


Future of MFI’s in Andhra Pradesh
A detailed report by “M-CRIL Microfinance Review 2012” shows the deep impact this crisis have taken on AP those MFIs that work extensively in Andhra Pradesh. By, November 2012, one medium‐sized MFI that worked exclusively in the state has effectively been taken over by its lenders through the conversion of a significant part of their debt into equity and some of the larger MFIs have negotiated a six‐year restructuring of their debt with their major lenders. Elsewhere, the shrinking portfolios some MFIs (in the absence of bank funding) have caused operational problems and led to the take‐over of at least three MFI managements by investors. More acquisitions of this type are likely to occur in the near future.
Future of Microfinance in India

Debate on the Dependency on commercial institutions

While this is an area of debate whether Indian Microfinance industry should be too dependent on commercial lending by financial institutions or should it follow the Grameen Bank model of Bangladesh. Unlike Indian model the Grameen model uses the deposits from the clients to finance their lending requirements

The 1.5% savings orientation of Indian MFIs is clearly very low by global standards. The L‐10(top 10 MFI’s) – more visible and, therefore, more vulnerable – have a negligible savings ratio, down substantially from the 23.7% of the 2003 M‐CRIL sample. All Asian countries with flourishing microfinance sectors – Bangladesh, Indonesia and Philippines – have deposit ratios that account for substantial proportions of portfolio – see exhibit above. Also, the rural banking system in India undertakes all it’s lending from deposits (portfolio deposit ratios >100%).


All microfinance stakeholders, whether within or outside Andhra Pradesh now await the passage of


“The Micro Finance Institutions (Development and Regulation) Bill, 2012” tabled in the national Parliament on 29 May 2012. It is generally thought that the bill has the following positive features


1 It specifies that the central bank, Reserve Bank of India, will be the regulator of MFIs


2 It provides for MFIs regulated by RBI to accept thrift from their borrowers – thus, no public deposits but the provision of a savings service to borrowers


3 It clearly removes microfinance from the ambit of state‐level money lending laws greatly reducing the risk of interference by state governments in the provision of financial services to low income families.


However the bill is stuck in parliament and with the central govt unable to come out of the firefighting mode due to spate of corruption scams by its ministers and therefore has been unable to get this bill passed. Hope the govt comes out of its policy paralysis to pass this bill in coming monsoon session.


In the meantime, the Government of Andhra Pradesh continues to challenge the constitutional validity of the bill on the grounds that in the Indian Constitution this despite the same party ruling at both center and the state. And if such a thing does happen it will be the end of road for the MFI in AP and those who will suffer will be millions of poor who will be denied a chance to earn their livelihood by their own efforts.

Posted by Saurabh Sinha at 2:17 AM